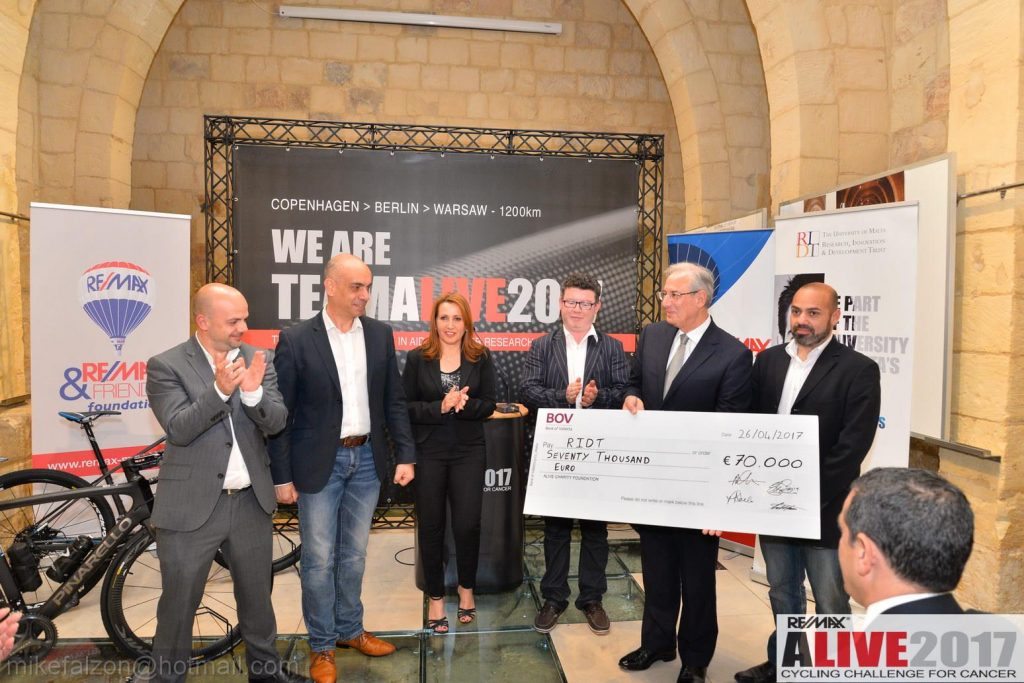 ALIVE Charity Foundation, the first charity foundation to raise funds for medical research in Malta, presented another donation of €70,000, the fourth one since 2013, to the Research Trust of the University of Malta (RIDT).  The money will go towards the University’s specialised programme in children cancer research.  The generous sum was collected by ALIVE cyclists who last year bravely ventured into the gruelling challenge of 1100km from Croatia to the Vatican City in seven days.

Held at San Anton Palace, under the auspices of The President of Malta HE Marie-Louise Coleiro-Preca, the presentation was witnessed by the Parliamentary Secretary for research, innovation, youth and sport Chris Agius, the Shadow Minister for Local Councils, youth and sports David Agius, and the University Pro Rector Professor Joseph Cacciattolo, representing the Rector, Professor Alfred J. Vella, who is also Chairman of RIDT.

“In our first four years of ALIVE Cycling Challenge for Cancer, we have donated over €300,000 to RIDT towards funding the fight to prevent cancer in Malta through medical research. The sponsored research has resulted in ground-breaking discoveries which have enabled more efficient identification of cancers in order to provide targeted treatment,” said Mr Nicky Camilleri Chairperson of ALIVE Charity Foundation, which forms part of the Board of the National Cancer Platform. “The public is acknowledging the fact that it is important to donate money for medical research for more effective treatment and eventually find cures.”

With the help of main sponsor RE/MAX, ALIVE invested another €70,000 euro in a project to renovate up to high standards an indoor and outdoor play area within Sir Anthony Mamo Oncology Centre. Mr Camilleri announced that the project will be inaugurated in the coming weeks.

Furthermore, ALIVE will be launching the ALIVE Cancer Research Programme in collaboration with the University of Malta. The purpose of this programme is to facilitate and increase the opportunity for Maltese researchers in the medical cancer field to apply for funding in order to reach their goals.

The RE/MAX ALIVE2017 Cycling challenge for Cancer will be held from the 7th to 16th July 2017.  The group will cycle a distance of about 1,200km in seven days from Copenhagen (Denmark) to Warsaw (Poland), passing through Berlin (Germany).

This is the 5th ALIVE Cycling Challenge, but the first to include both mountain bikes and road bikes.  There will be two parallel routes, one for mountain bikes which will include more trails, and another for road bikes that will be slightly longer but on asphalted surfaces.

Highlighting the encouraging fact that the number of cyclists on the road has increased especially since Malta is facing an obesity problem, Mr Camilleri appealed to authorities, especially the police and local councils, to take action against drivers using their mobile phones while driving or not observing stop signs. He also stressed on the importance of increasing road maintenance as this is posing a safety hazard to cyclists, especially those with road bikes. “This forms part of ALIVE’s vision in favour of a healthier and more effective lifestyle which diminishes the risks of cancer as we focus on increased medical research,” he said.

On thanking ALIVE Charity Foundation for their generous donation and efforts, Professor Cacciattolo said: “The University of Malta is producing some critical studies in medical research, in particular cancer research. Investment in science and medical research is vital in securing a sustainable and successful future. Our success depends on the support of individuals, the private sector and community-financed projects, such as the ones raised by the ALIVE Charity Foundation.”