With our mission of creating theatre for young adults in mind, once again we sought to develop a performance that can inspire and educate other young and budding theatre enthusiasts. With our forthcoming show ‘Pandora’, however, we decided to take a deeper look into the uncanny and relate such a narrative to a local, Maltese context.

Thus, after months of vigorous research, we developed our titular character, Pandora, a 16-year-old girl from a working class family. Pandora grew into a very rigidly conservative and religious family – a mindset strengthened by the family’s death of their second-born son, a boy named Neal. This event helped Pandora realize that she is unlike other people: from a young age, Pandora did not view death the same way other people did. Rather than seeing death as a tragic and melancholic event, Pandora viewed death as a mere transition from one state to the next; an event that does not have to warrant the tragic facade it is given.

Because of this, Pandora grew up being told that she wasn’t normal and needed to change – by both family and friends alike. This led to our protagonist becoming marginalized and closed off to the world as she struggled with society’s conventions of normalcy.

Our performance shall thus see Pandora go through a journey of self-acceptance, wherein meeting a group of whacky and unconventional 20-year-olds, helps her rethink such notions of normalcy. One can thus call ‘Pandora’ a story of acceptance and growth, as we see our protagonist develop and change into a self-actualized teenager who, although aware of her flaws, is accepting of her unique self.

Who is our target audience?

Our performance will most certainly appeal to teenagers and young adults, people who are currently going through the ‘discovery stage’ of their lives, finding and learning new aspects of their life which they probably never discovered before and showing that it’s okay to be different and to question everything and everyone around you.

Our role in the production.

Each member of the collective has an important role that they hold to contribute towards our upcoming production. We always divide the work according to our strengths within the performing arts industry.

Although we have our designated roles, as a collective we are constantly supporting each other and giving our feedback towards anything being done, making sure that everyone is constantly on the same page and equally contributing towards the production.

What we want out of this show. 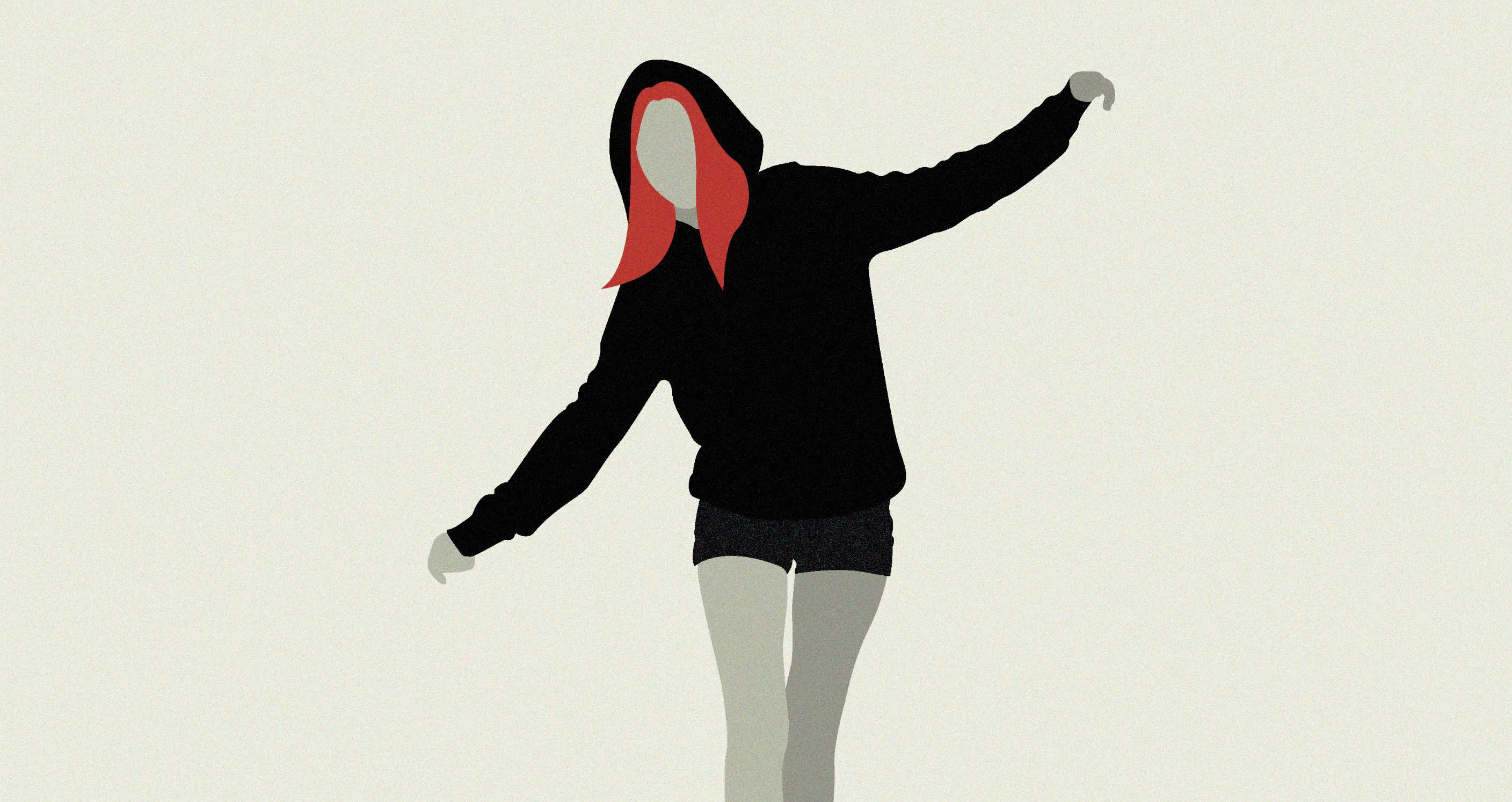 From this piece, our aim is to show that every teenager should feel safe enough to challenge society’s norms and ask questions about life, so as to find their own meaning to it. Each person should accept themselves the way they are, and be confident enough to set foot in the world as nothing less as themselves. Apart from this, we want to encourage young people to see the theatre as a place where they can see their thoughts come into being and inspire themselves from it. Theatre should be a platform for young adults to experiment and grow within limitless bounds and this is what we, the Ħassle Mejjet Theatre Collective, strives for.

Formed in late 2017, opening its doors in 2018, Ħassle Mejjet Theatre Collective (in short, Ħassle Mejjet) was formed to devise and create theatrical productions to by up-and-coming theatre novices, both original and devised content as well as previously written work by some well-known playwrights.

Ħassle Mejjet is more or less a social and personal experiment to learn new, innovative ways of bringing ideas from people who began their training in the arts many years prior, learn from mistakes and aim to reach high!

Why should I help? 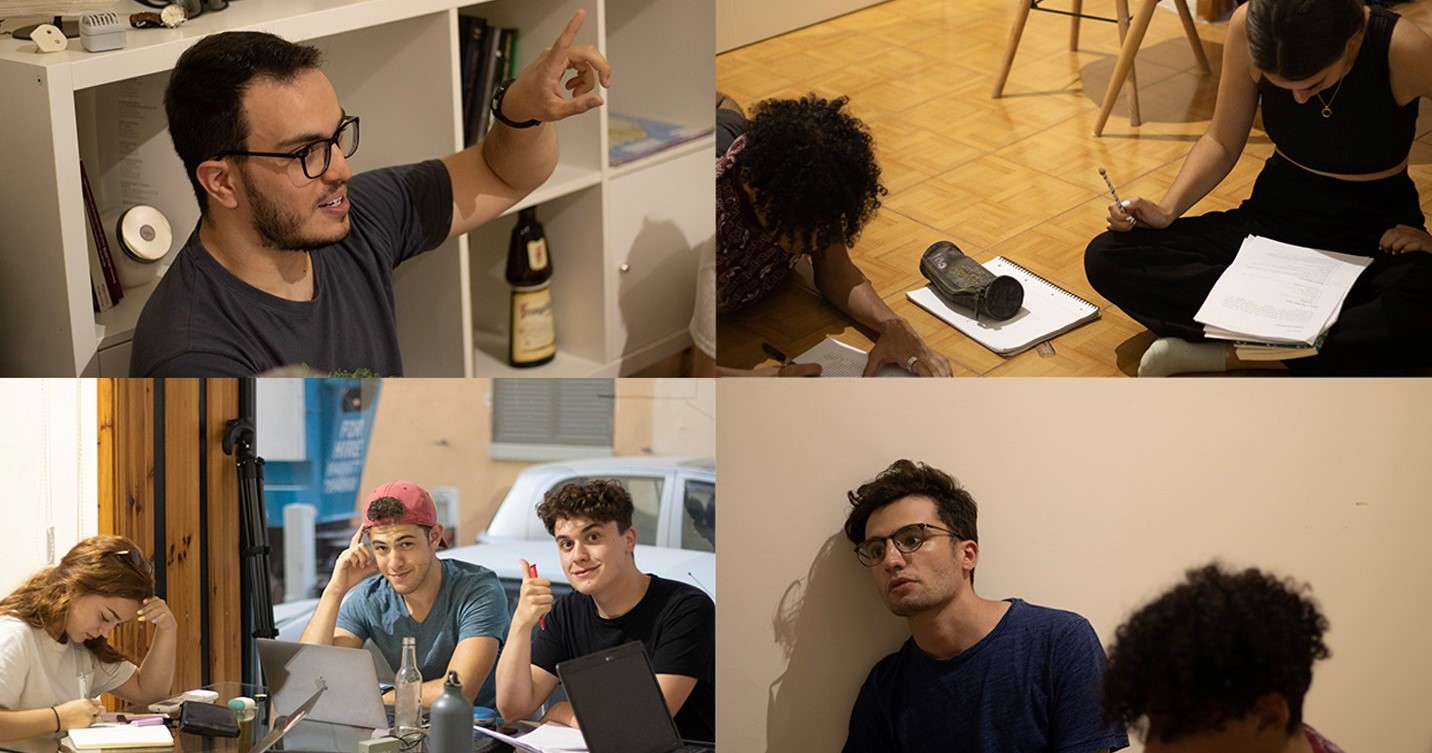 Making theatre is never easy, especially original work created by young people. Supporting young artists in creating theatre can help us further create even better productions in the near future and to keep the theatre collective on it’s feet whilst also supporting this production in any means you can.

Although we have an amount of our budget being provided to us by our wonderful sponsor; APS Bank – however, we still need a bit more. Your contribution will help us fund:

None of the contributions (including any extra funds we receive from this crowdfund) you provide here will go into the pockets of the theatre collective’s members but instead are helping to fund this production! 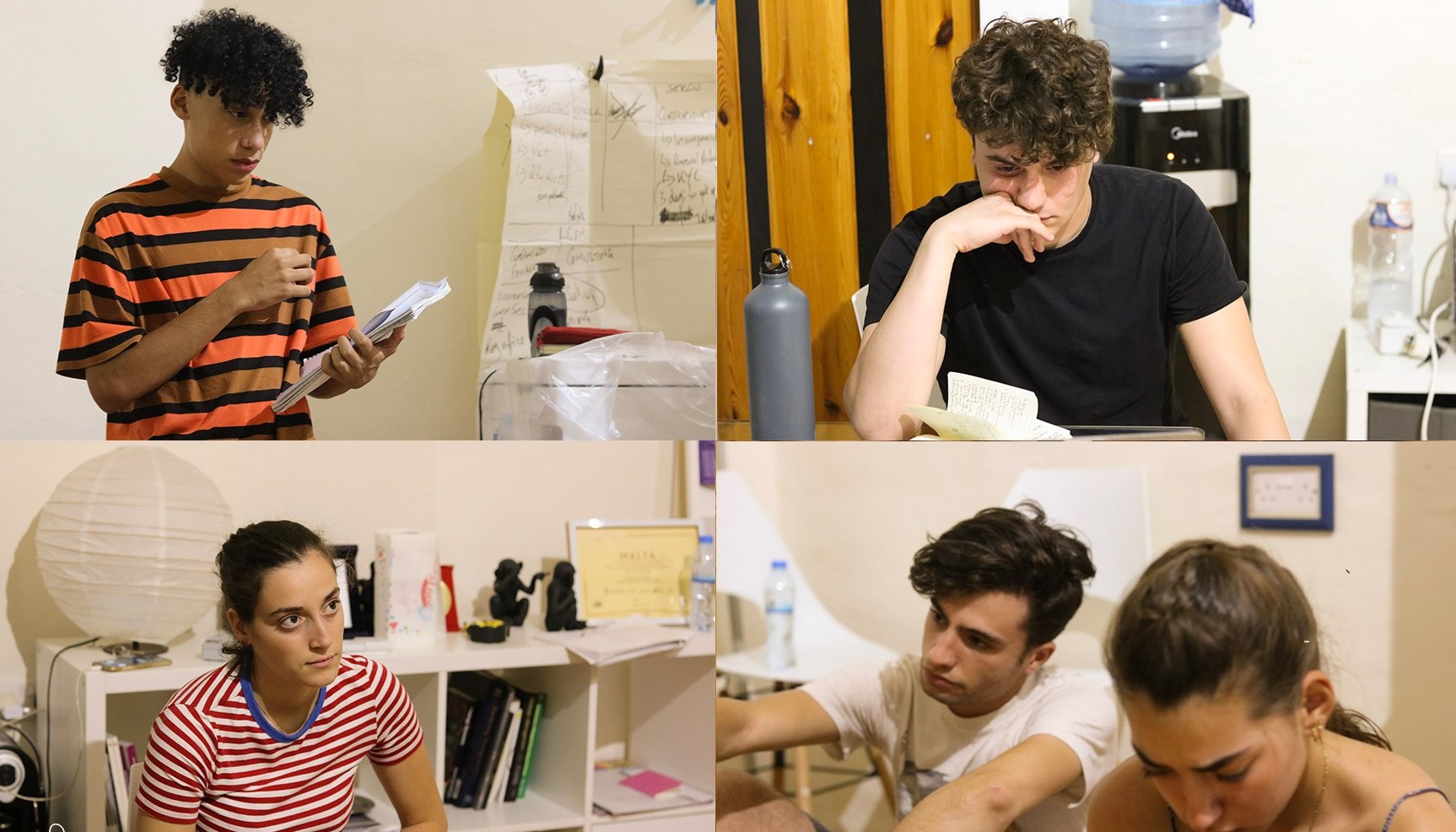 Your support will mean the absolute world to us and you will be helping fund work created by young people for young people!

So, from the bottom of our hearts, thank you! 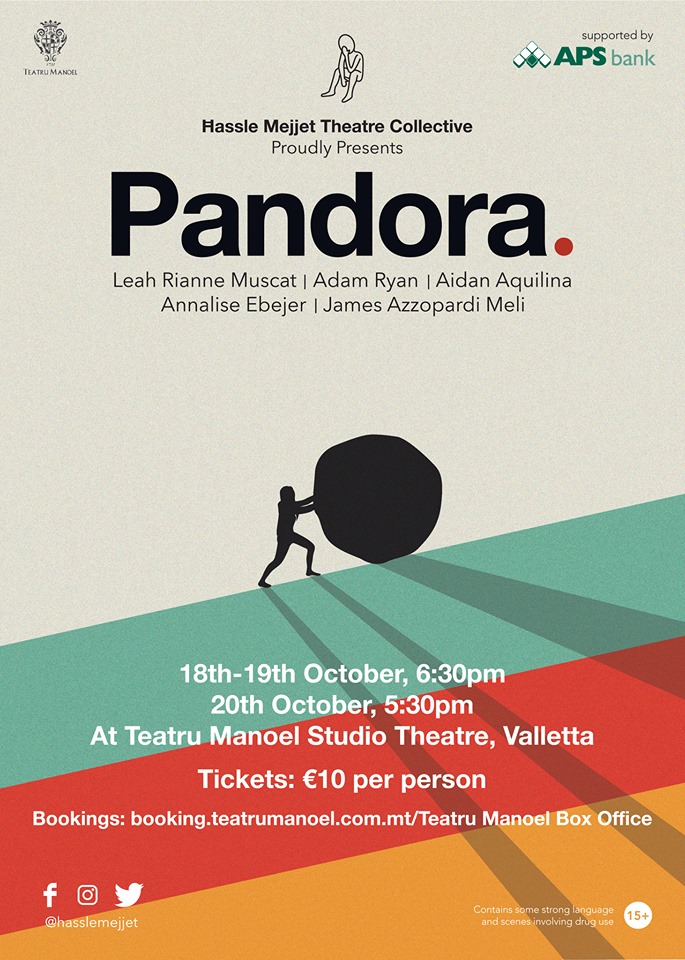 How much does the whole project cost?

Any excess funds will be saved as emergency funds just in case anything happens in the process!

You stated that APS Bank will be providing a substantial amount, why are you asking for an additional 550 EUR then?

Although we cannot thank APS Bank enough for supporting us and ultimately theatre work by young creatives, we still need the additional 550 EUR to help us secure a financially stable production, as stated previously, making theatre ain't cheap!

Why is the ZAAR campaign remaining open a week after the last show?

The reason as to why the ZAAR campaign will be remaining open a week after the last performance, which is Sunday 20th October, is to allow audience members who have seen the performance to still donate and receive a cool reward in the process if they want to

When and where is Pandora being shown?

Pandora will be shown on the 18th, 19th and 20th of October 2019 at Teatru Manoel Studio Theatre, Valletta

What is the age classification of Pandora?

How long is the show?

The show's duration is approximately 1 hr and 15 mins

How can I help this project become a success?

When and how will I get my reward?

Once the campaign is over, we will contact you via email with details on how and when you will be receiving your well-earned reward, as well as, any additional information we may need from you! Give us a few days however to get back to you, as we will need to process all the necessary details

Does purchasing a reward automatically entitle me to a ticket?

Unfortunately no, tickets are not provided to any ZAAR backers and none of the rewards listed will entitle you to a complimentary ticket as this will be a breach of a contractual agreement between us and the theatre venue. If you do wish to purchase a ticket, you may do so by visiting the booking website or by visiting the box office (in the specified business hours found on their website). If you want to know more about the show, you can visit our event page

What happens if the projects fails it's goal?

Unfortunately, these things happen and although we don't wish for this to happen, if it does happen, ZAAR will refund every single backer as soon as possible and we will not receive anything - it's a tough town baby!

What happens if the project exceeds it's intended goal?

We will be eternally grateful and will mean that the production will be ten times better than what we are aiming it to be and any exceeded funds we receive will go straight into funding this production!

I have more questions, where do I contact you?

We will be more than happy to hear you out, so please don't hesitate to email us (hasslemejjet@gmail.com), message us on Messenger or through our website

I want to know more about you guys, where do I find said information?

As a famous store chain happily states; every little helps, and for this little contribution; we will tag you in a massive thank you post on our social media sites and also provide you with some cool high-def ĦM wallpapers to use on your desktop computer/mobile phone!

We knew you were awesome!

And we're so thankful for this! For this contribution; we will send you a set of three ĦM stickers + we will also send you a thank you note from all the cast and crew, as well as tag you in a massive thank you post on our social media sites and also provide you with some cool high-def ĦM wallpapers to use on your desktop computer/mobile phone!
Limit: 9 of 100 taken.
James
€20.00

A thank you goes a long way!

And it's so true! For this contribution; we will send you a set of three ĦM stickers, we will also send you an A3 poster + a thank you note from all the cast and crew, as well as tag you in a massive thank you post on our social media sites and also provide you with some cool high-def ĦM wallpapers to use on your desktop computer/mobile phone!
Limit: 2 of 100 taken.
Dyson
€30.00

You really loves us don't you?

We send the love right back at ya! For this contribution; we will send you a wonderful ĦM branded tote-bag to carry all your heavy things + we will also send you a thank you note from all the cast and crew, as well as tag you in a massive thank you post on our social media sites and also provide you with some cool high-def ĦM wallpapers to use on your desktop computer/mobile phone!
Limit: 6 of 50 taken.
Dr. Micallef
€40.00

Get it? Because Emmett Brown from Back to the Future is a doctor and Dr. Micallef is a doctor too- nevermind... for this contribution however; we will send you a fashionable ĦM branded t-shirt to show off to your friends + we will also send you a thank you note from all the cast and crew, as well as tag you in a massive thank you post on our social media sites, and also provide you with some cool high-def ĦM wallpapers to use on your desktop computer/mobile phone!
Limit: 0 of 20 taken.
Pandora
€50.00

WOW! We cannot say how grateful we are and for this amazing contribution, you will receive the ultimate reward tier; we will send you a fashionable ĦM branded t-shirt to show off to your friends, we will also send you a wonderful ĦM branded tote-bag to carry all your heavy things + a thank you note from all the cast and crew, as well as tag you in a massive thank you post on our social media sites and also provide you with some cool high-def ĦM wallpapers to use on your desktop computer/mobile phone!
Limit: 2 of 5 taken.
Step 1: Specify your contribution amount for Pandora
Support Now